NBC’s hit show “The Voice” showcases the vocal talents of contestants from across the United States. But one of the main reasons for the success of the show is the charisma of the vocal coaches on the show. Maroon 5’s Adam Levine and country music superstar Blake Shelton have been the only two coaches that have been on the show throughout its 7 seasons. The current season, the 7th, has featured first time judges Pharrell Williams and Gwen Stephani. Season 8 is set to have Christina Aguilera return.

Each of the coaches offer a very unique style, not just vocally but with their dress and their home decor. We are going to take a look at the homes of the coaches of “The Voice” and see how their style shows itself in their homes.

Adam Levine’s bedroom is a lot like him; It gives off a bit of old Hollywood charm mixed with Rock and Roll sensibilities. There is a respect for music of all kinds that is evident. He has pictures of musicians from Tupac to Kurt Cobain to Bob Marley. His room also has a casual feel of a loft apartment occupied by a jam band (but if that jam band went on to sell millions of albums). It is a bedroom that a bunch of guys would want to hang out in but also that a woman would feel comfortable in.

We can take a look at the Nashville mansion of Blake Shelton and his musician wife Miranda Lambert.  Their home is a southern palace fit for the king and queen of country music. It is full of classic style. Their bedroom eschews modern clean lines for a lavish décor with heavy Baroque influence.

Some might prefer Blake’s hunting inspired bachelor pad found in a Country Weekly interview. He even had bunk beds!

Pharrell, perhaps most famous for his song that inspired people to get “happy”, has a home that looks like the home of a happy person. Bright colors, chairs with human legs, cartoon posters, and ultra modern design intermingle to create a vibrant and fun home.

I really would’ve guessed a Jamaican style bedroom for the woman who helped popularize Ska in the 90’s and has a son named Kingston. Or perhaps a very funky and bright eclectic design since Gwen started Harajuku Lovers. But the African style is very classy and elegant and perhaps Gavin Rosdale helped design the room with Gwen. You can see in this picture how glossy black floors in a room that gets a lot of light can be not only really pretty but also not that dark.

Christina Aguilera is famous for her vocal embellishments and maybe she should be just as famous for her décor embellishments. Her bedroom is sort of the feminine counterpart to Adam Levine’s room (which may explain some of the chemistry). This is, again, old Hollywood glamour all the way. Red velvet sofa, black lace canopy, ornate chandelier and that really cool gold glossy floor all make for a stunning and visually interesting room. Christina envisions herself as a modern Marilyn Monroe and this is the perfect bedroom for a blonde bombshell. 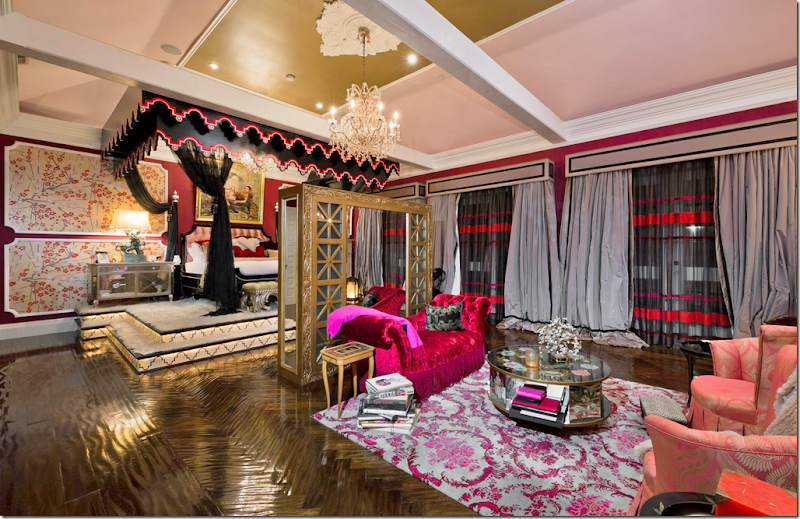 NBC’s “The Voice” was one of the first singing competition shows to put the emphasis more on picking a future pop star based on their voice rather than their image. And while we whole heartedly agree with that we also like to peel back the curtain sometimes and take a look at the style choices that the shows stars make in their homes.